The Bangladesh National Party (BNP) is (Not) a Terrorist Organization

Immigration authorities made the allegation that my client (a young man, a foreign national in Canada) was inadmissible under paragraph 34(1)(f) of the IRPA – that the Bangladesh Nationalist Party (BNP) (of which he is a member) is an organization that has engaged in the subversion by force of the Bangladeshi government and has engaged in terrorism.

When I first reviewed the Minister’s admissibility package, I was somewhat taken aback. Politics on the subcontinent, particularly Bangladesh and Pakistan are rough-and-tumble affairs. As a former Refugee Protection Officer, I reviewed hundreds of refugee stories. Details became blurred with PPP members fearing the PML, Awami League or AL members fearing the BNP, and a whole host of other acronyms (JKLF, etc. popping up) and, with changes in government, allegations of harm, violence being reversed.

It never crossed our minds back then to invoke s.34 against whole political parties notwithstanding the violence perpetuated by individual “goons”. We certainly did it for other, limited, brutal organizations such as the SSP.

The fact of the matter is that relations between the Awami League (now in power) and the BNP are deeply bitter and vituperative.

It looks like it has crossed someone’s mind because this is not the first time that the BNP has faced this allegation; it’s been rejected in the US and I was fairly optimistic that it would be rejected for my client’s sake as well. The one thing that gave me pause was a recently released decision by the Federal Court here in Canada upholding an officer’s finding that the BNP was in fact an organization caught by s.34 of the IRPA (Gazi v. MCI 2017 FC 94). I was obviously concerned with a finding that would brand my client with the mark of Cain, that he is a ‘terrorist’ and that too, for the rest of his life.

My client and I appeared before the Immigration Division in February. Troublingly, the Minister relied on spurious documents, cherry-picked the other evidence, and ignored evidence that the BNP does not sanction acts of violence. 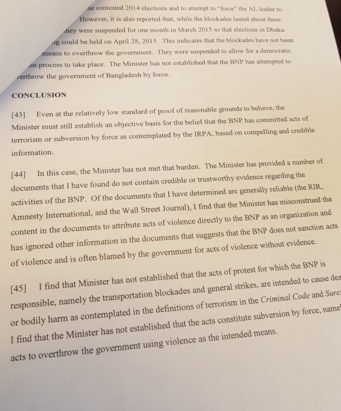 Thankfully, the allegation that the BNP engages/engaged in subversion by force/terrorism was found not be well-founded.

For a number of reasons, I’m not going to be sharing the decision itself (for now).

There are a number of resources available to those facing similar allegations.

Counsel will of course have regard to Suresh and the Criminal Code as well as jurisprudence relating to subversion by force is Najafi v. Canada 2014 FCA 262 and Oremade 2005 FC 1077. It’s important to determine whether the impugned organization sanctions the impugned acts (Jalil 2007 FC 568).

Counsel should be prepared to deal with disclosure from the Minister that may not be in fact credible or trustworthy, particularly “news” articles from within Bangladesh (“fake news”). Compare the contents of same with Amnesty International and other objective, independent country condition documents. The Minister will likely conflate the BNP with “opposition supporters” or “BNP-led opposition supporters and, in this particular case, did not distinguish between the BNP and the other groups that form the opposition to the AL. Your own disclosure should include the GOC listing process and list of proscribed entities, that of the UK and the US (none list the BNP). According to Karakachian 2009 FC 948 the fact that an organization does not appear can be considered one indicia among others that it is not a terrorist organization. The Minister will likely rely on Gazi where the Federal Court upheld the officer’s finding that the BNP is an organization engaged in terrorism. However, the case can be distinguished.  Find and disclose the US (immigration) court that rejected the claim that the BNP is a terrorist organization, grab the brief from the National Immigration Project Practice Advisory (“The Bangladesh National Party is not a Tier III Terrorist Organization”) and disclose that too.

I hope this is of assistance to others.